Crossing the bridge from Malmö to Ohio in Dallas.

This video embodies all that was Auckland and living out of that apartment in Otahuhu way on the outskirts and in the wrong direction from Henderson. It was a rush.

Welcome to the New Year.

The derby road show goes on and on. After all the great food of Milwaukee at Midwest BrewHaHa, can you say mac and cheese pizza and George Webb hash brown omelet, we headed to Feasterville which is somewhere near Philadelphia for the pool party that is East Coast Derby Extravaganza 2016. Next up: Men’s Roller Derby World Cup in Calgary, Alberta! shooting for Team France! [vive la France!] and Team Canada, eh?

Update! October 11, 2016. After the ride to Lansing, Michigan to shoot the D2 Playoffs for Tri-City Thunder and Calgary Roller Derby, it’s been the month of travel in September, taking the train to Montreal. Flying to Vancouver to shoot on behalf of VRDL, then back to Toronto then heading out to Madison to shoot for the Ohio Roller Derby in Wisconsin. The 2016 WFTDA International Playoffs are concluded thankfully, and the 2016 WFTDA Championships are ahead in November!

We also got called upon to shoot a video for the Toronto based band Paint, something we have not done for a long time. The event was celebrated for the birthday of the Paint lead singer at Horseshoe Tavern on January 28, 2016. You can watch the video on YouTube on the link below. 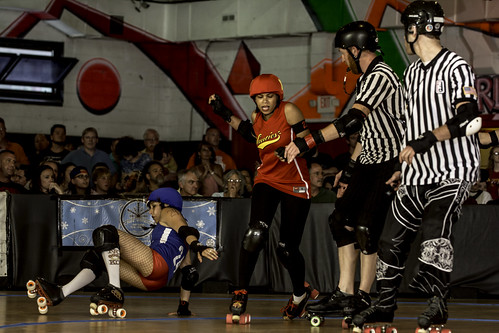 Threepeat for the Nickel City Knockouts!