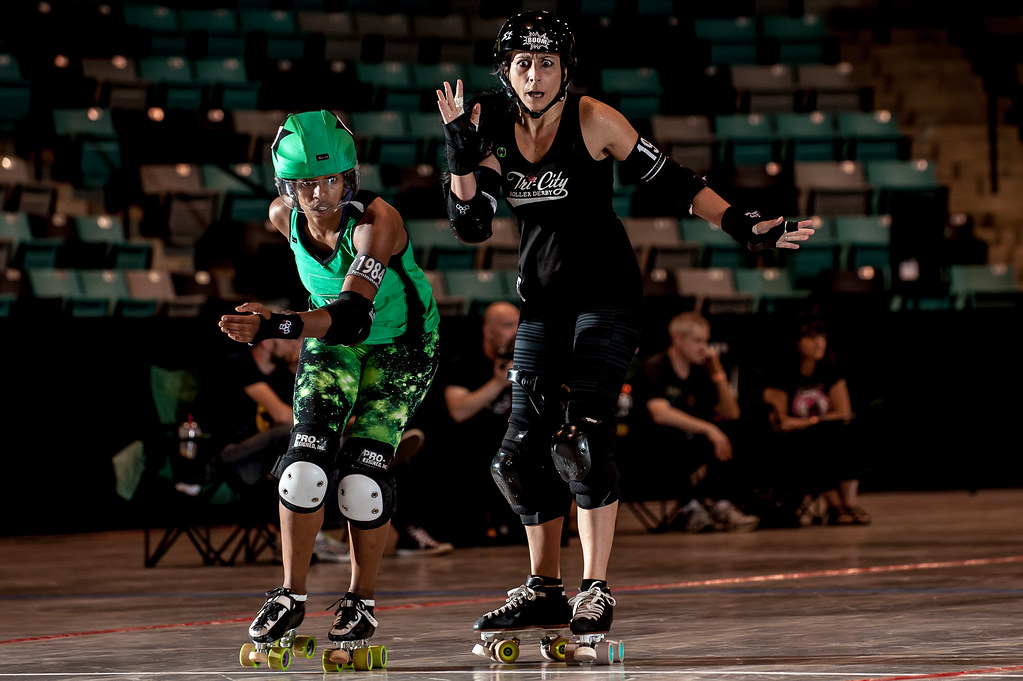 This story appears on Derby Spotlight at: A Fistful of Brawlers
The gallery of photos for this bout are on Flickr at: www.flickr.com/photos/midnightmatinee57/

The line-ups are as follows:

Furthermore, “we knew they had trained with our A Travel Team, The New Skids on the Block after this, so we fully expected the team to have a different strategy and game play. So we were pretty much going into a bit of unknown territory and knew that it would not be an easy game and that TCRG were a really good league. We’ve worked hard over the last few weeks but we knew TCRG were doing exactly the same!”

The tandem of announcers from Montreal Plastic Patrik Pink and Thunder’s Lightnin’ Slim rekindled the exciting energy of Beast of the East 2010. The Sexpos brought eleven skaters but only 10 entered the bout itself. The Thunder had generously allowed four members of WFTDA’s New Skids on the Block to bout with the Sexpos in the presences of 40oz Georgia W. Tush, 202 Nameless Whorror, 1111 Bone Machine and 18 Trash n’ Smash. Not bad at all!

With Sexpos rookie #454 Chasing Amy on the first lineup in her debut followed by #11 Hymen Danger, #33/45 Beats Per Minutes and #40oz Georgia W. Tush [nimble bunny] jamming against Thunder’s 204 Motorhead Molly, 5oh Cellblock Bettie, 3 Kitty Crasher and 19 Lippy Wrongstockings, the Sexpos built a 4-0, 10-0, 19-0 and 28-0 lead and visions of another Beast of the East shutout flashed before my eyes before Celllblock Bettie #5 for the Thunder broke the shutout with her own grandslam for a 29-5 comeback. Within three jams the score had closed to 29-12. It was no easy task at all for Thunder having to encounter the additional New Skids on the line. However, by the first timeout the Sexpos were assured with a 44-12 lead with a 9 point run by Beats Per Minute. Thunder were to score only one more point while Sexpos accrued three more grand slams and the first half ended at 61-13 for the Montreal squad.

“I think the game saw some great plays from both teams and the score for me doesn’t really reflect how tough a job it was for us on the Sexpos. We skated with 10 players so we were all on every other jam, sometimes more. Not all of us were used to that kind of intensity. I personally remember being pretty grateful for half time when it came!” says Hurricane Hayles.

After the intermission the game really revved into top gear with Thunder striking back with a vengeance.

“The half time break must have seen a fantastic motivational speech in the Tri-City Thunder dressing room because when they came back they prevented us getting lead jammer a number of times, which caused us on a couple of lines to rethink strategy and try to adapt our playing and hold on to the lead which was ever shrinking at this point,” says Hurricane Hayles.
With twenty minutes left in the final period the score was closed to 62-39 with Thunder’s Cellblock Bettie jamming against 33/45 Beats Per Minute on the line. Next jam Hymen Danger vs. Lippy Wrongstockings narrowed the lead even further to 62-41. Then Georgia W. Tush took off against Motorhead Molly with a resultant 71-46. Bone Machine against Cellblock Bettie then Lippy against Hymen Danger again saw the Sexpos lead soar away. With the score posted on the scoreboard at 78-46 with 14 minutes left on the game clock, and Chasing Amy in a power jam lineup with the towering Trash n Smash, Beats Per Minute, Low Dive Jenny, Bone Machine and Hymen Danger [gold helmet 11], the total Montreal shutdown came into effect with a combination of the famed Montreal slow pack guarding the inside, effective blockers forcing Thunder jammers to the outside boundary lines with a flying block or two, and a tight pack squeezing daylight away from Thunder jammers. The Montreal blocking was like a smooth machine, so in sync with each other. Both the Thunder and Montreal surprisingly sped away the pack themselves trying to make it difficult for jamming points.

Hurricane Hayles comments: “Once we managed to get our heads and plays together again we seemed to do a lot better. Although we suffered from a little bit of penalty trouble we were thankfully never too short handed on track and managed to avoid a full sin bin.”

The lead expanded to 88-46. Slowplay tactics at the start of jams to kill time and counter Sexpos’ penalty situations thwarted Thunders best efforts by Bare-Leigh Legal, Greta Garbage or sin-e-star and Lilith NoFair to negate the wall that was Nameless Whorror and Trash n Smash and the situational Montreal blockers K-Dawg, Hurricane Hayles or triple threat captain Beats Per Minute.

Thunder tried to hit back but the team that were able to counter newly minted WFTDA full members Lake Effect Furies with their own pack strategies were facing another team in a league of their own. [“It was like the NBA!” said one Thunder after the match.] At 91-46 with Cellblock Bettie and Beats Per Minute on the line, Thunder were never to garner another point despite best efforts by her teammates to get Cellblock Bettie through, she getting knocked down not once but twice trying to blast through the wall of doom that was Nameless Whorror along with the likes of Hymen Danger and others-and another knee down situation with Jill Standing on the floor. “A more efficient way of working in comparison to the beginning of the second half saw us finish at 115-46,” finishes Hurricane Hayles.

“The TCRG are wonderful hosts and amazing skaters and I always thoroughly enjoy playing with them. I truly look forward to seeing them all again for more hard skating and fun times at Beast of the East 2011!”

Tri-City Thunders captains sin-e-star and Bare-Leigh-Legal graciously conclude this story. “We are super proud of how our girls played. MTLRD is a force on the track and they are among the best in the world. It is always so much fun to play them and they are an amazingly talented league of athletes. Every game we play against them we view as a learning opportunity. We learned so much this weekend and look forward to analyzing and dissecting the game. Games like this remind us of how far we have to go in derby but also how unbelievably far we have come. We heart TCRG…DMN8! Oh, and lastly…ok Sexpos, you took the first one, and now the second….but third time’s a charm…we’ll be back 🙂

Grateful acknowledgement to everyone on the Tri-City Thunder and Montreal Sexpos including Bare-Leigh Legal, sin-e-star, Anita Martini, Lippy Wrongstockings, Pepper Assault, Hurricane Hayles, and to MTLRD Johnny Capote and GTAR’s Canadian Psycho and Coach Marquis. Anyone who I missed in naming, you are still acknowledged.

One nice benefit at the very end of the night as we were packing camera gear for the trip back to the bright lights big city was the after concert by The Shanks as they played their merry raucous tunes as the crowd exited the Waterloo Memorial Auditorium and their number one fan was videotaping the two members for the night band. Their CD “The Dark Richard Show” was presented and has been listened to more than once to get through the sad times with Christmas Star our favourite song of the moment which is so Big Star Adventureland moody.