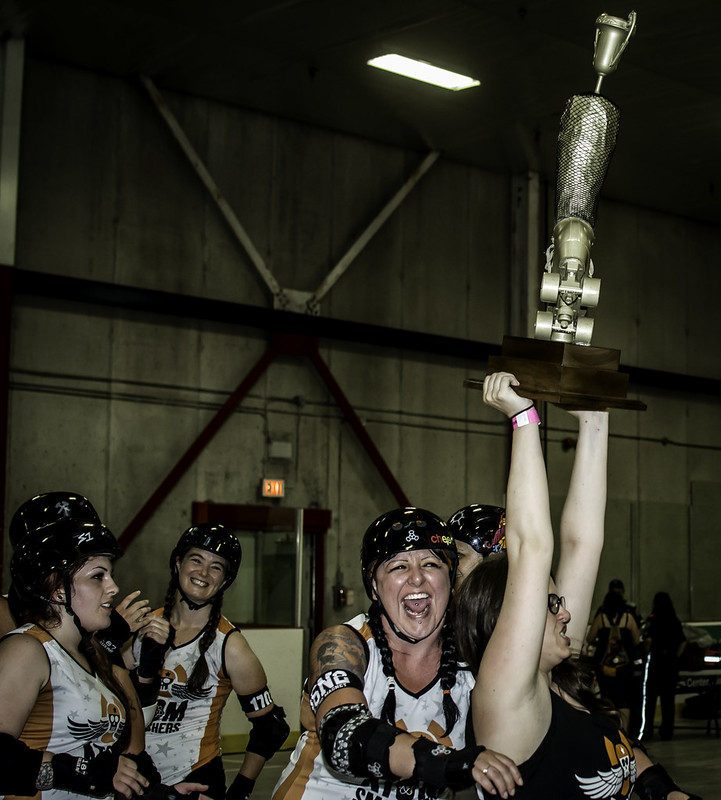 It seemed a summer ago that the league that proudly represents Durham Region revved it into high gear at Gibson’s Cup. The two home teams in the league bouted for the first time at a sold-out venue filled with very vocal fans, many no doubt getting their first taste of live Derby. Atom Smashers and Motor City Madames were the two home teams going head to head. League coaches had to switch off allegiances for the night and ringers were brought in as guest coaches whose advice for the ladies was skate hard skate fast.

The onset of winter has not chilled their spirits, the Derby revolution continues in Oshawa at Coachlite Roller Rink. It had been quite the journey for the league, harkening back to earlier stories about Durham [which can be found on this site], their search for identity and a space around the time of their first bout at The Hangar against the D-VAS back in August 2010, then move forward another year to the Gibson’s Cup. (Click here for Gibson’s Cup and Classy Trashy Ladies.)

So this particular Tuesday was of some significance to some as it was the one year of some happening in the band of DRRD sisters. We were along for the ride in Hitz’ car to be taken to Coachlite to witness the practice and drills along with shenanigans of these spirited ladies.

Kudos to the refs who with their height and reach advantage set up my speedlights, indeed Tuesday night was all right for fightin’ and shootin’. The whiff of Derby was in the air, and Lucid Lou was on the track in her Death Track Dolls outfit to parlay her advice and hitting skills and drills. All in all, it was a success on this side to capture the action, fraught with spills and go for it drive.

“Wehave been training hard and are really excited for our upcoming season,” says fearsome Betty FugetaBOUTit (a.k.a. Laurie Turner in another universe some do not acknowledge) of the Atom Smashers. “We’re very proud of the progress our girls have made in the off-season and we’ve recently welcomed a great new crop of freshies who are ready to tear it up on the track!

Durham has had tournament bouts given the 2 Fresh 2 Furious ordeal of last year, but Beast of the East in April will verily be Durham’s next big test to date as they look to their own version of blood on the track.

Cutsie Bootsie [again in another universe known as Sarah King] continues with what it feels like to be a part of Durham going into the league’s second season.

“When I first joined the DRRD family it was a small group of girls that really had no idea what we were doing or getting ourselves into. We had lost our rink and were skating in random parking lots, and refs were definitely something we had never experienced. Going into our first game against the D-VAS I can remember sitting on the bench thinking “is this really what I want to do?” I felt defeated and more exhausted then I had ever been before.

“But things have definitely changed! We got our rink back along with an Amazing new coach Blammo of the Chicks Ahoy! Since then DRRD’s world of derby is a much different and better place. With the help of Blammo and a group of dedicated DRRDy girls we have since had 2 Freshmeat programs giving us enough girls to split into 2 teams, Motor City Madames and Atom Smashers! Not to mention that we now have an amazing group of dedicated refs to help keep us in line.

“With tryouts for DRRD’s travel team, the Durham Derby Devils coming up in the end of March everyone is getting super excited to start the new season. I can’t wait to see what this year brings us! It will be the first time for both The Madames and Smashers to play teams from other leagues.

“We will also be hosting four to six bouts this year which is really exciting. We are hoping to show Durham Region just how awesome derby really is and that we only plan on getting bigger and bigger! I am so honoured and proud to be part of such an amazing group. We definitely came across some drama and problems along the way but the truth is we all love each other and would do anything for a member of DRRD. The men and women of this league are definitely my second family and I couldn’t imagine my world without them in it!”

It’s the derby story, the fight for pride and glory, a case of Durham Derby do or die … here’s looking at you, kids!

Stay tuned for more insights into the new season for Durham. Betty FugetaBOUTit reminds everyone in the meantime drrd.ca is the place to go for all the latest information on the Durham home schedule at the ACC [Ajax Community Centre]. Plus Durham will be keeping busy in the next while with GWT boot camp, an incoming visit from the Bay Street Bruisers, and do or die tryouts for spots on the Durham Devils. DRRDy deeds indeed.

All photos here can be found on Flickr at Midnight Matinee.

Photos for this bout are on Flickr at www.flickr.com/photos/midnightmatinee58


The Classy Trashy Roller Girls of Durham Region are a self-described “kick ass team in the making”! And they lived up to their motto as they took to the track for their first game down in Toronto at The Hangar. As part of the 241 Double Header with the Queen City travel team from across the water, Buffalo’s Lake Effect Furies against CN Power, the opening game marked the debut of Durham Region and the Classy Trashy facing the resurrected Deadly Viper Assassination Squad [short form D-VAS] in the incarnation as ToRD’s rookie team. Rebecca Pym / Bones Brigade or “Bonesy”, a seasoned veteran of ToRD Death Track Dolls and CN Power has founded DRRD in Oshawa. She brought down the “you have to be fearless” [quote courtesy of Durham Region News] Durham DRRD squad of eleven players – which in numbers could be a challenge to roll a team on the track. However, not everyone on the team was a rookie, #4 Jewel Kicker [seen last year on the Betties] was DRRD’s triple threat, and with further ammo from #60 Mini Gun from another ToRD blast from the past Bay City Bruisers. It seemed to be more with joy than any trepidation that the first whistle of the jam blew to mark the start of the bout. In the two shortened to 20 minute periods reminiscent of the Montreal tournament Beast of the East the D-VAS were able to build an early lead, seemingly more comfortable on the ToRD track. However, that was no problem for DRRD Jewel Kicker who blazed around the track as jammer. AND BLOCKER. Bones Brigade went skate to skate with her pivot counterpart and captain Misery Mae from D-VAS. Skinned-Knee Crosby the assistant captain of the D-VAS had bouted for the first time ever as a member of the Frenemies against the Rollergettes on May 15 at George Bell Arena. Now in her D-VAS debut she was on pivot and blocker on the outside wall. She as well as the rest of the D-VAS who might be was vying for a position for the draft into ToRD, she has shown a real improvement.

Part of the D-VAS team was Emma Disaster #716 who also hailed from Buffalo. One other name who was familiar from the Canada Day scrimmage was Wolverina with the fierce looking three clawmarks designating her number 111, taking her three point stance on the jamming line to boot as well, AND taking on all three Derby positions. Strategizing, strengths of play could be scrambly at times with plenty of hits and falls, variations of Derby stance and trips leading to the penalty box and the proverbial struggles to stay upright on the track during long no lead jammer jams.

The referee contingent including Parking Lot, Penny Whistler and Classic Joker called it “100% rules from start to finish”, making sure the rookies kept it clean and would learn from their mistakes. There were even a couple of misconduct penalties.

Primary jammers for the Classy Trashy Roller Girls in the first half were #126 Cutsie Bootsie, #18 Roxy Rollah and #6 K-Rip in the first period squaring off against #13 Hellbat [originally from ORD], #1129 Santilly in Yo’Face, #111 Wolverina and #5 Titney. While Hellbat started off the game with a 4 point jam for D-VAS, Roxy Rollah responded with an 8 points on the second jam. The D-VAS were actually holding an 18-15 lead until Hellbat broke for a 14 point run to take the game up to 29-22. With 4:52 left in the period Wolverina with her warpainted face went against Roxy Rollah and scored four more points. As the real world ticked past 6:30 p.m. and the first period with less than two minutes in the first half #911 Krash Klown made her entrance on jammer with an 11-2 jam. Jewel Kicker closed off the first half for the Classy Trashy Roller Girls with a 4 points and the D-VAS ahead 44-32.

With the advent of the second half, Jewel Kicker broke back for DRRD with a near double slam of 9 points against 3 for Santilly in Yo’ Face. For the rest of the period, D-VAS sent jammers Santilly in Yo’ Face #1129, #13 Hellbat, Titney #5, and #111 Wolverina against the likes of #126 Cutsie Pie, #6 K Rip and Jewel Kicker #4 who was probably being held back due to her Smoke City Betties experience took the line only twice. With a triple grand slam from Titney followed by 9 from Hellbat the D-VAS took the score up to 75-44 and dominated at the line for the rest of the game until the last jam. There were plenty of spills and hits sending blockers and jammers to the floor – and double collisions amongst same teams. D-VAS with more awareness seemed to have more control of the pack. With the score at 93-53 with two minutes left, it seemed inevitable that D-VAS were going to get their century, yet both sides were playing full out and giving ‘er the best they got until the game ended with DRRD’s K-Rip closed it off with a double grand slam of her own and a 110-63 final.

Durham Region with all its travails fielding its first team and both leagues garnering first game experience for their rookie teams must be a proud and valuable accomplishment for all. ToRD has new talent waiting for next year’s draft on their farm team.

Under the guidance and coaching of all concerned including Blammo, Goodietwoscrews and Bones Brigade, Derby in Oshawa/Durham Region should not be a secret any longer.