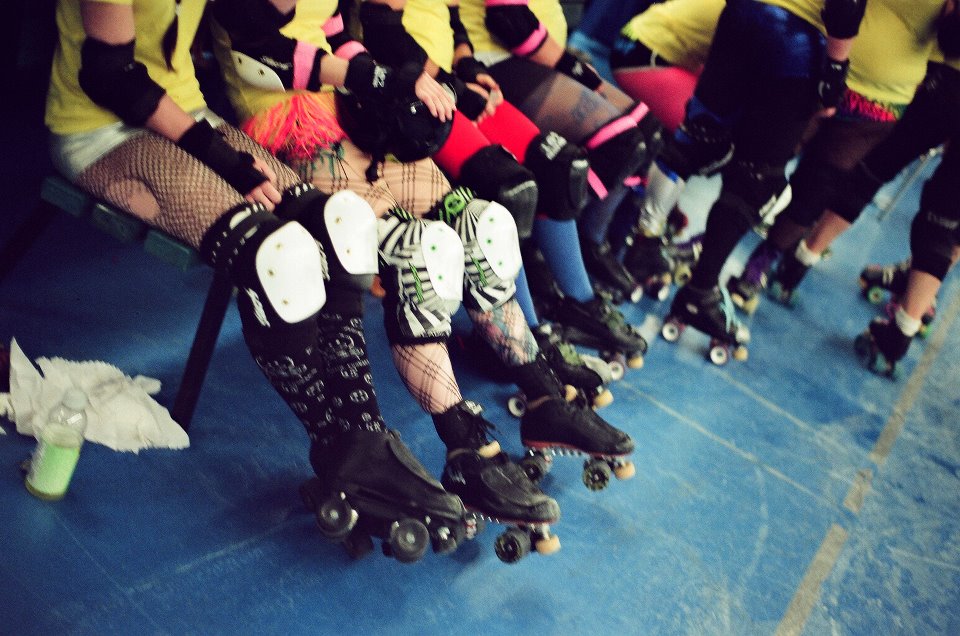 Preamble: Jen “Sureshot” Wilson has been a very busy lady in her world of art, but has graciously taken a time out to provide once more her incisive viewpoint of the Derby goings-on at the end of season doubleheader at Forest City. Her previous story on the Thames bout with Filles du Roi and Luscious Lunch Ladies against Royal City All-Stars is also here. Take a moment to read that, too!

War on Wheels
by Jen Wilson

The Guernica themed program said it all. The arena in London filled up fast and everyone eagerly anticipated a good night of derby. After the Star Spangled Banner, the Canadian anthem wouldn’t play so everyone sang it which gave the night a down home feel which put our American sisters at a bit of a disadvantage. 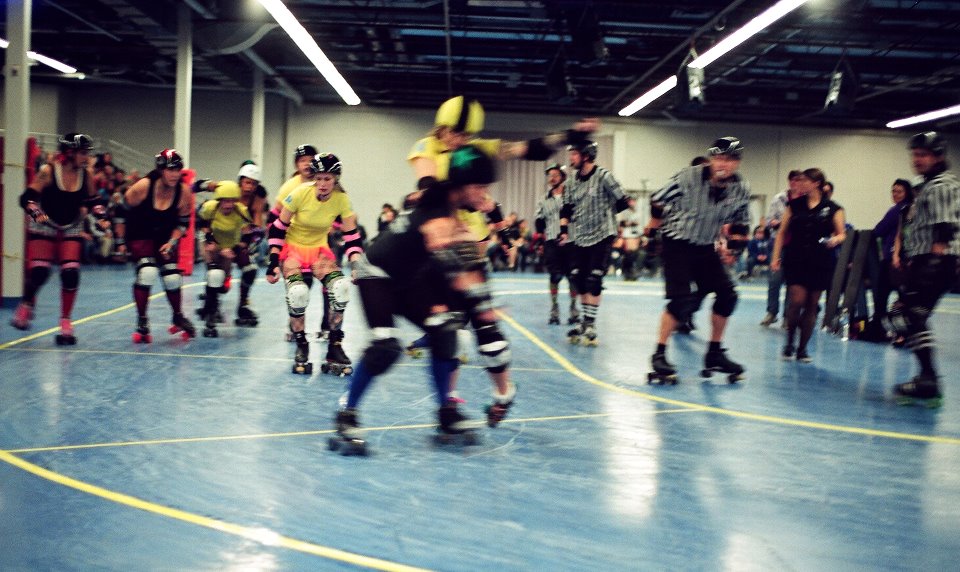 The Thames Fatales were up against the Roc City B-Sides from Rochester and watching the Fatales warm up made me think that they were going to have a wicked game. The London teams work hard and it shows. They mean business. The B-Sides were no push-overs though! Lethal Lorelei was a very hard hitting blocker who powered around the track and wound up in the sin bin often. Actually, many players from both sides warmed the sin bin seats repeatedly throughout this bout. Slacker Smacker, Killson and Back Alley Sally did most of the jamming for the Thames Fatales. Killson was blowing past everyone seemingly leaving the B-Side blockers stunned. Annie Takers, Jemecide, None Yabiz and Mirambo did some awesome blocking, but the B-Side jammers did a great job too with Halestorm, Temper Tangent and Tata Pain. It was a hard hitting game.

At one point Slacker Smacker went down from slamming into Mirambo but she walked it off and got back in the game. The Thames Fatales were holding the lead and then kept that momentum until the end. They kicked the B-Sides’s B-hinds. 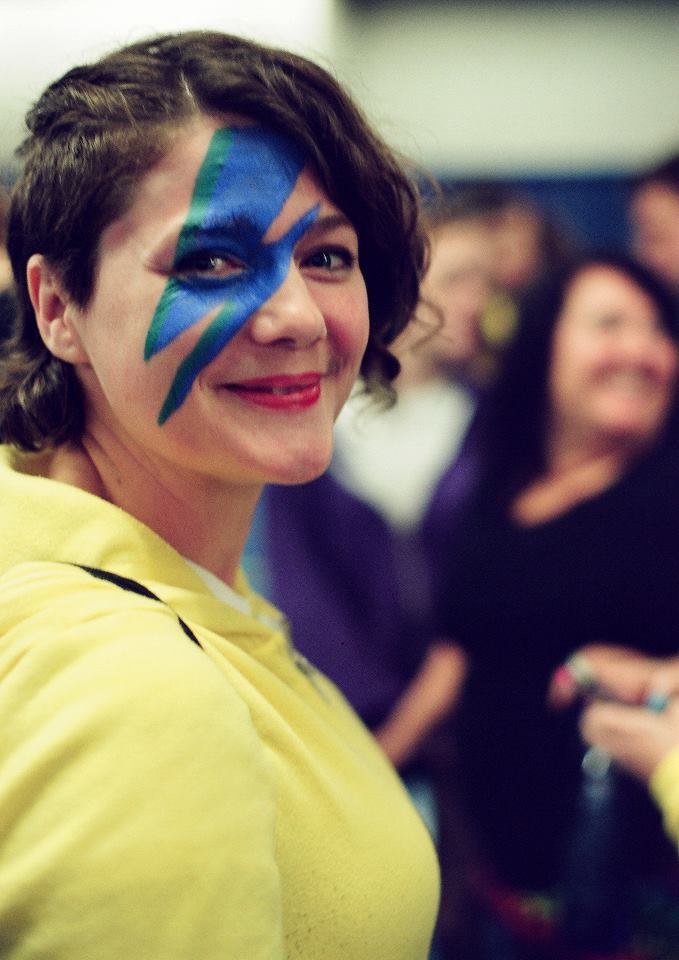 The next game was the London Luscious Lunch Ladies against a mixed team of Guelph’s Royal City Rollergirls plus their coach alongside some Eastside Derby Girls, too!. The Lunch Ladies were in fine form and Glamarchist’s Bowie face paint gave everyone some eye candy. 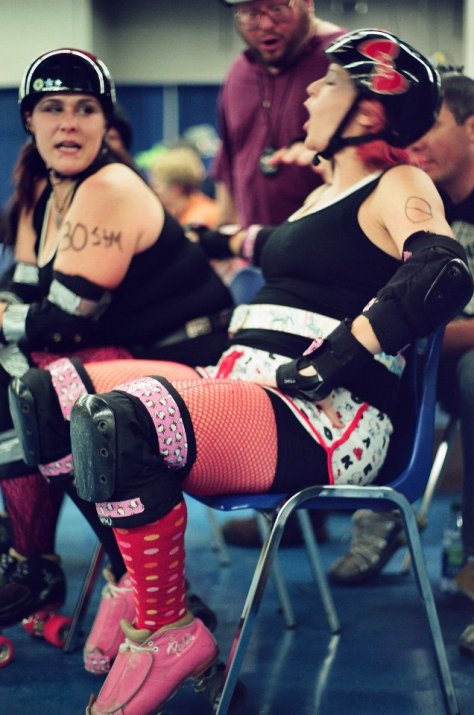 They gained a strong lead early on and kept it throughout. Thor, Elle Boes and Box Kick Betty were the jammers. Thor is a very strong skater and all the Lunch Lady jammers did great dodging and weaving around the blockers. Hot Cross Guns from Guelph is small but fast, although when she’s caught by the London blockers she can really fly. Dynasty Hit and Hustle were also jamming on that mix-matched team, and Hustle always seemed to plow through whatever was in her way. Goodbye Kitty from Guelph was a powerhouse blocker, but again the training and endurance of the London team won out.

Mischievous Lady T, Andi Slamberg and Glamarchist did some great blocking as did Torque E Mada and Bloodlust Barbi.

Both games were hardcore with lots of fouls on all sides, so there were many power jams to be had. Everyone’s favorite derby photographer Joe Mac [jm: aww really?] was there snapping away and I spoke with the announcer Lightning Slim from Tri-City about the World Cup that will be in Toronto very soon starting in December. 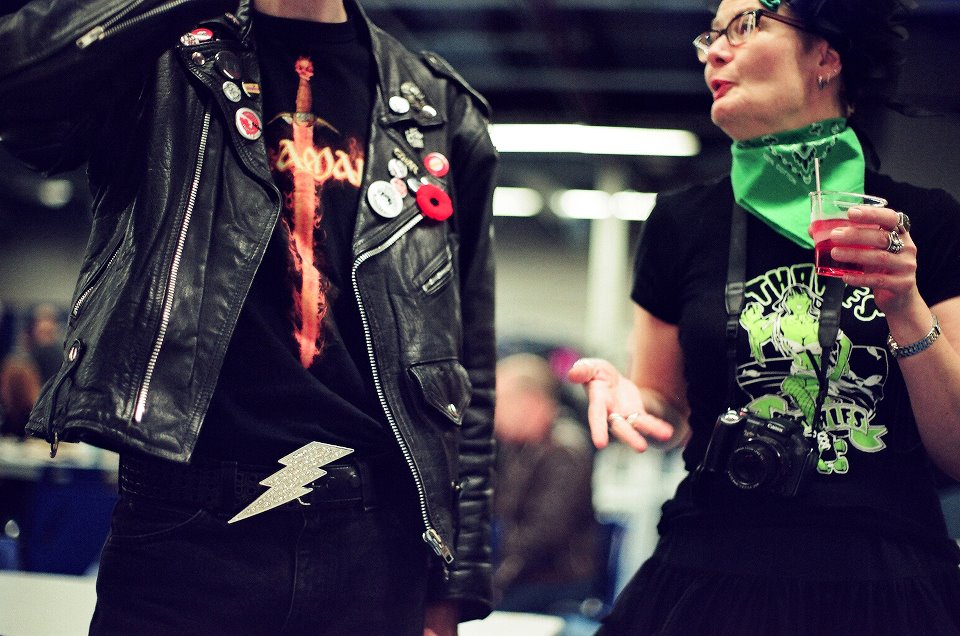 Killson from the Thames Fatales is on the Canadian team and I can see why! She is one of the fastest jammers I’ve seen. Go Team Canada!!!

All photos courtesy of Jen Wilson. This is a gallery of some of her views of the night.