Derby, the final frontier. These are the voyages of the … its one year mission – to boldly try once more for 52 in 52

Keep checking my Flickr site at Midnight Matinee for the latest Derby photos and more!

You can call me the photographer derby nomad on the road. And on a new note: Th-that may be all folks! for this year. Thanks to everyone who made it happen!

Hammer City Eh! Team vs. Killamazoo Derby Darlins in Caledonia, Ontario in February on the coldest day of the year. This is shot INDOORS. 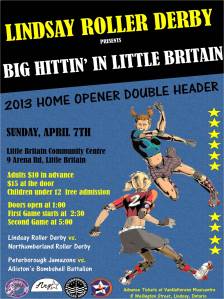 Derby, the final frontier. These are the voyages of the … its one year mission – to boldly try once more for 52 in 52

Keep checking my Flickr site at Midnight Matinee for the latest Derby photos and more!

You can call me the photographer derby nomad on the road. And on a new note: Th-that may be all folks! for this year. Thanks to everyone who made it happen!
I actually ran into the USS DentHerPrise! and K-Wow!

DSC_6423-Edit, originally uploaded by Midnight Matinee 24.
Who knew what malice of forethought lay between the sibling rivalry that existed deep with Queen City. Lamb Chop, captain of the Nickel City Knockouts looked to inflict some pain upon her brother and rival Señor Wiener who stood by the bench of the Suicidal Saucies as their coach.
Please note that this is still a story in draft form. Stranger in a Stranger Land – part 3 to come later.

These were just some of our thoughts as we ventured back down into the States for yet another heart-stopping experience of the Queen City brand of Derby at its best. The tasty treats of the evening included the Lake Effects ice cream! A tempting selection of Queen City Roller Girls Rocky Road, Salty Caramel, Vanilla & Graceland (inspired by Elvis). Not being able to wait until halftime and at the behest of Diamond CrushHer the Rocky Road was delved into, and it was pure heaven. Cold chocolate and delectable marshmallows for that sweet bite.

After ice cream, revenge is a dish best served cold and the Saucies were looking out to get back for their loss to the Knockouts the season before. The Saucies bench was strong replete with representation from the QCRG All-star travelling team Lake Effect Furies, but Lamb Chop, herself a Furies veteran, stood with 20 strong Knockouts behind her. In between them stood Mama Chop, the inveterate waver of the mighty foamy lamb chop. But on this game day she could have been torn figuring out how to support the two teams while she bled blue inside. Adding to the mixture was the other family member Shock-Her who had to remain neutral as head ref for the night. The Saucies and coach had to rebound from the sour taste of a loss in a close bout from three weeks before with the Alley Kats, a match that could have gone either way. With first game experience behind them, the Saucies used the interim between bouts to get everyone onto the same page, draftees and veterans alike. Part of the Knockouts advantage was more cohesiveness as a team, having had to fill fewer holes in their roster between seasons.

Sweetening the pot for the night were the Ice Ice Babies opening the night and making their bout debut before a live audience. The energy of the junior team of Queen City was running rambunctious around the rink as they quickly donned uniforms for the night and their team photo. The Ice Ice Babies divided into two teams of Frost Bites and Snow Bunnies, nervously taking in the energy of the crowd as they circled the track for their introductions. The bout was limited to a 10 minute period with one minute jams. Yet it probably felt like an eternity for the fearless and talented bunch on the rink. The referees had to race to keep up with the Babies jammers. Scoring ran high with the score reaching 90 to 84 by the end of it all.

The Ice Ice Babies bout meant the Knockouts and the Suicidal Saucies had to warm up twice which may have dissipated some of their bout energy. The night was less of the devastation and more into the go for broke jamming and defensive posturing. The blue was more than dressing down the Saucies as the first period ended with a 101-45 advantage. Crazy Legs only took to the jammer line once for the Knockouts but they had the indomitable BJ Harmstrong and Ruby Revenge and Unsung. It was hard to not notice those particular ruby red shorts on the line.

The 101-45 halftime advantage underscored the decisiveness of the Knockouts as they preyed on and pried upon holes in the Saucies pack. By the end of the night the lead crept near the triple digits, but that was not the story of the night which was another nose injury inflicted upon QCRG and the Saucies’s Nova Cain. Brave soul that she was, she came back donning the face guard to jam again for her team.

The night concluded with a 191-93 score for the blue, with the house music blazing LMAO and the ladies dancing on the track. With some shaking of hands with the audience and hugs with friends, it was not the usual everyone dashing to ring around at trackside to get the low or high five with their heroes of the night&#emdash;at QCRGm the crowd is already as close to the track as they can get&#emdash;it’s that intimate.

The after-party at the Renaissance was a short drive away after the coach of the Saucies had proffered a bottle of American champagne to the victors. The theme of the night was soup, and homemade soup it was that hit the spot for the hungry and exhausted skaters who were slurping on the likes of bacon and cheeseburger, pasta, cheese and beer, a sweet potato chili that was all vegetarian and all good. While trying to stay on the outside and witness the red and the blue, we offered the Knockouts captain the Toblerone rose we had been carrying across the border. It may have been the dumbest thing we ever tried to do, but getting the hug and the invite to sit with the blue was even more than icing on the cake, it was being in the middle of a dream come true. It could have been a dangerous tactic by yours truly to wear the Team Canada t-shirt when Team USA’s Addy Rawl was sitting at the same tabke, wearing her Team USA jacket and shirt. We could only remark upon the World Cup match of Stars vs. Stripes back in Toronto when the two sides during warm-up and introductions circled the track at a breakneck speed never before seen in Canada. She remembered the night well, and remarked how exhausted she was afterwards. Surprising how feisty some Team Argentina player can be, shouting “blooooo!” with the accompaniment of the rest of the bloo cast. A photographer’s job should never stop and some discrete photos were taken here and there. Journey was playing downstairs which beckoned Diamond and crew to the gym hall while others took leaves to go the after-after-party. It seemed a shame not to partake of the price of beer in Queen City, and after passing over the choices of Blue or Canadian and instead asking the barkeep for a good American beer, he offered Budweiser. We talked about the differences in Canadian and American beer, and he said something along the lines that the US was not allowed to offer the high alcohol content up in Canada.

While the beer was going down and soup being sipped, the clean-up was on with Mama and her small motley crew washing out crock pots and bowls and figuring out how to carry what was left back home. [It was all good soup, just more than could be supped on.] While everyone took off or finally fell asleep watching the end of Fargo on the high definition cable in the darkness, it was time to hit the pillow yet again in America.

This is a story still in the writing and editing stage.