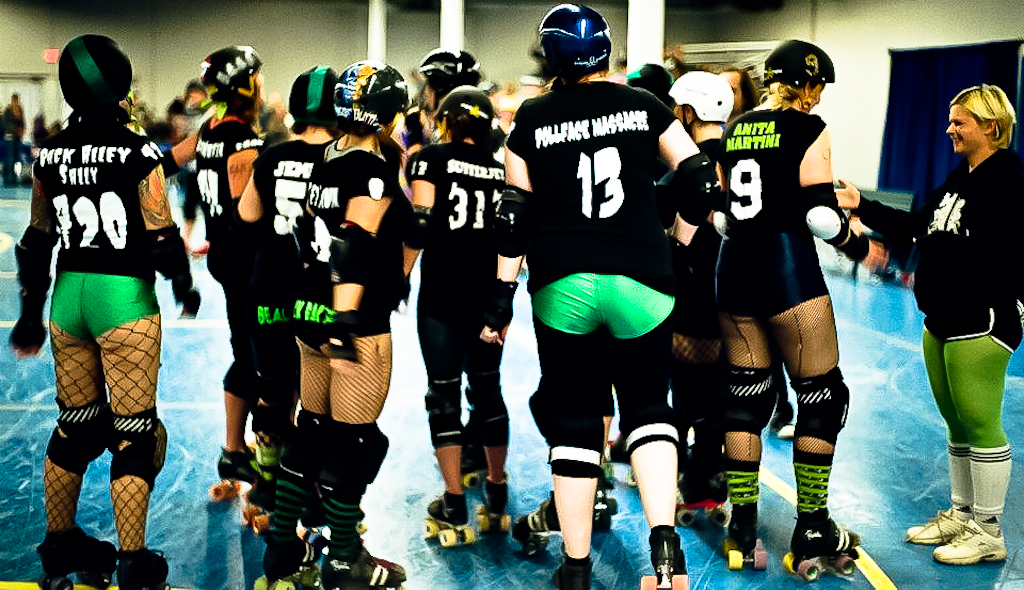 Jen “Sure Shot” Wilson, the first photographer to witness GTAR coming out of the Derby ooze, captured the doubleheader at Forest City using her trusted Spotmatic film camera. When she’s not shooting Derby her works can be found at www.jenr8.

This story contains the notes and photos of Jen Wilson, along with contributions from Dr. Johnny Capote.

The story of the day would be the heated rematch between the Thames Fatales and Les Filles du Roi, the victors at Beast of the East 2010. During that tournament the Fatales had fallen to FDR by 91 to 12.

Whenever Montreal has been on the road this year, it’s always a question as to who would be on the track this time? The match at Tri-City had featured a short-benched Contrabanditas with substitutes from the other MTLRD teams, as had the match between CN Power and the Sexpos. So in the bout at Forest city, who would Les Filles du Roi  feature on the roster? While the programme stated the following: “That’s What She Said / Asil-X / Raffy Duck / Krakatoa / Beth Rave / Magnum P.E.I. / Waxey McBush / Al Strapone / Phunky Bladz / Dame of Doom”, all in all there three imports played for Les Filles du Roi that night: Rouge, Nameless Whorror, and Krakatoa.

No matter the line-up, Les Filles de Roi always play it tough, and it is never a good idea to cross them. Especially with Nameless Whorror in their line-up for the day.

Although Montreal has been going through a small string of losses on the road, says Dr. Johnny Capote on Montreal: “They just have been sending patched-up rosters lately, not by choice. And the house teams have been off since August 6th” after the Montreal Roller Derby league’s Championship game ended with Les Contrabanditas fending off Filles du Roi 99-80 in a Ditas jammer penalty filled second half that nearly doomed their chances of winning.

Jen Wilson noted: “The second game was a grudge match between London’s Thames Fatales and Quebec’s Les Filles Du Roi. The crowd needed to be coaxed to roar as the evening took on a slightly more serious vibe. Mirambo keep the energy going as Killson as jammer raced circles around everyone. Slacker Smacker was also jamming a lot but looked like she was taking a beating on her right hip. Les Filles fought hard but was always a bit behind. Magnum P.E.I. was huge and it looked like she would be an impenetrable blocker. However, she was a bit slow and the Thames pack would target her early and hold her at bay. Krakatoa and That’s What She Said did some excellent jamming for Les Filles du Roi, but London was just too strong and they won the game. They were fast and it was a hard brutal physical battle with the emergency crew coming onto the rink at least once, but thankfully no one was seriously injured. It was a great night for the Forest City Roller Derby and Thames got their measure of revenge.

“The night started with an awesome match between the London Luscious Lunch Ladies and the Royal City Rollergirls All-Stars from Guelph. It was an intense game. London had a good lead into half-time with Mighty Thor and Box Kick Betty doing a lot of the jamming against Guelph’s Hot Cross Guns and the Archbitch of Slamterbury. In the second half Guelph came back strong with The Hellcat of Panar jamming quick and slick through a lot of trouble. When trouble found her in the form of the London blockers though, she would fly. London put up a good fight but Guelph quickly caught up to them. They were a mere 3 points behind with seconds left on the clock!

“During the last jam the Lunch Ladies jammer on lead was in the penalty box when the Royal City jammer got caught up in the blockers, and just then the LL jammer came out of the penalty box and burst through the blockers and then stopped the jam. The crowd went wild! It was amazing!” The final score was 138-135. So close!!”

It should be safe to say that the night’s loss is not a reflection on the future of Montreal Roller Derby. “It’s more about who’s left to play travel games,” says Dr. Johnny Capote.  Speaking about the future and upon the Royal City Rollergirls, he says: “They are only missing a piece or two that only time develops. I saw them at CWRDA East, and really liked what I saw.”

all photos courtesy of Jen Wilson at www.jenr8.com/

Jen Wilson’s background in Derby: “I took photos of Toronto’s Derby Debutantes when they first started practicing, but I have never been to a real game until this October 1st game here in London. I really didn’t know what to expect. I took a place on the floor in the “suicide seats” area. That was cool. I also placed myself by the corner and figured I wouldn’t move around, just catch whatever action I could from there. I figured that if I moved around too much I would miss something on the other side of the rink, and I didn’t have a zoom. I was also worried about the film so I brought 400 and 200 speed, 200 being the best. I set the aperture (2.4) and speed (125) and then waited for the fun.
“Roller derby action seemed easier to capture than break dancing, which was hard to imagine because the skaters are pretty fast around that rink, but I think it was easier to anticipate when action was going to happen because I was watching the game unfold and I could see the jammers coming up to the blockers. When the players all get together you can tell there’s gonna be business.”
“I love the unpredictability of it. And I also love being a part of the game as a spectator and feeling the energy of it. That translates to the photos if I’m enjoying the game and not really worried about what I want the pictures to look like. I am there more to enjoy the game and enjoy taking pictures of the game. That’s what gives me the photos that I like.”