Skip to content
Preliminary ramble : For the second time we were heading to Fergus Derby country [after a bit of a adventure which will not be mentioned here]. After a more than a scintillating day with Bonnie D. Stroir, Fergus stepped up to the plate once more with Francey Pants. We had seen Francey Pants at full speed at Blood and Thunder World Cup in Toronto. Now she returned to this part of the world in a busy schedule. Bouting with the Vicious Dishes against Rideau Valley in Ottawa [where apparently she owns a home which she visits, in lieu of playing with Ridea this time she decided to roster with Tri-City to keep it more fun], then coaching amongst Toronto Roller Derby and CN Power on a Tuesday, Tri-City on Wednesday, then Thursday with Fergus and partcipants who were invited and jumped at the chance to partake of Francey Pants’s skills. The Fergus facebook page listed some of Francey Pants’s accomplishments to date.

So Gentle Readers out there: here is Fergus Roller Derby in the words of Sonia Pitbull Bomber Maiorano herself.

he founders of Fergus Roller Derby (Stephanie Goodchild a.k.a. Ivanna Slappa, Sonia Maiorano a.k.a. Pitbull Bomber, and Cynthia Waldow a.k.a. Waldow) decided to start a new league up in Fergus Ontario, to spread the word of derby and make a mark by opening with a big BANG! With a group of great people and a vision, they were able to have Francey Pants come up to run a clinic not just to their league, but to the surrounding areas; to spread the word of derby and have a legend in her own right come and give some of her time and expertise! With two and a half hours, Francey Pants was able to give two and a half hours of jammed packed information and drills that made everyone sweat with derby excitement! Yet, another accomplishment in such a short time of this new league’s beginnings in only May of this year!

hat are Fergus Roller Derby’s hopes for this new year? Potentially another guest coach (but you’ll all have to wait and see!) To see more people encouraged to participate in one of the most fastest sports that is forever growing, encourage women of the Wellington County and surrounding areas to join in this sport with us, and to be able to play, make their mark, and still be themselves out there.

We’re here to practice, we’re here to play, and we’re not going anywhere …our motto is Skate, Sweat, Sport , and we mean it.

ergus will play under that motto and for anyone interested in coming up to be a part of our league, you can contact us at info@fergusrollerderby.com

Anything can happen in Derby and anywhen too. Believe it or not-last night was the first time ever we have witnessed a Rollergettes win on the track. Neither team carried full rosters but those who were there represented their colours as best as they could. It was a closed bout, and it wasn’t all about points but learning on the fly too. There were zebras from as far away as Hammer City and Royal City to make the calls and help guide the fledgling refs of the Rollergettes. Timeouts and learning sessions at the centre of the track entailed referee discussions and talking points with the player. Taking a knee down on the startline, when is it a major? Why doesn’t your team just take off if the opponent doesn’t move?

The Rollergettes answered a few questions of their own. Could the Rollergettes without Goldie on the track fend off the Belles of the Brawl. Goldie and others served as NSO while the Rollergettes called their own plays off the bench. Rollergettes old and newer Punkii BrüzHer and Crystal Mess along with Knuckle Slamwitch and Danger! Danger! alike in black took on the green and black of the Belles featuring familiar names such as Justine Sane, Lass Compactor, S. S. Sativa who were all part of 2 Fresh 2 Furious just last month. A fun bout turned in some hard hits and falls and a narrow 55-49 victory for the Rollergettes by the cutoff hour of 10.

The evening would be a warmup for things to come with Capital City looking forward to hosting the Rollergettes on August 6, while the BCRG crew will be in Dundas on the 13th taking on the Hammer City Harlots. Also on the 13th, the Rollergettes will be holding their last homecloser of the season the Violet Uprising, one of the three teams of Royal City. Belles will keep busy on the 27th hosting their inaugural home bout against Ottawa Roller Derby.

Postscript to the Readers out there: Yep, it’s August already and we’re trying to play catch-up with all the Derby from last month. Just be patient, there’s good Derby ahead.

Sonic Doom was up at the bar in the  Sleeman Centre.

We pointed a finger at him and said: “He would know! What was the final score?”

Meanwhile, just minutes before at the Downtown Throwdown doubleheader, the GTA GStars more or less in the guise of the Derby Debutantes took on the Royal City All-Stars for the second time this season while the Belle City Rollergirls took on the Violet Uprising home team from RCRG.

Justine Sane of Belle City found herself in the sin bin for numerous infractions and seemingly upset with it all found herself ejected from the game with 11 minutes to go, to which she waved goodbye with a smile.

The young guns from Royal City squared off in a rematch of epic proportions against the Debutantes or all-star variant thereof. On their home court the All-Stars blasted two jammers off the line that we had been warned would be a surprise catch them if you can.

In the aftermath of the Black Eye Affair between the Chrome Mollys and Belles of the Brawl, once again we hear from Justine Sane. All fierce and fun at the same time, she was part of the pack that led the Belles from Brantford’s Belle City. Once again she was back at the Ted Reeve Arena where she had once been with the GTA Rollergirls.

Justine Sane starts off then we will hear from one of the other Belles Lass Compactorof the night.

“Our league was so super excited to play the first game,” says Justine Sane. “For me playing at Ted Reeve was bittersweet, it was great to have my first game with the Belles of the Brawl in familiar territory, but it was also weird to be a visitor against GTAR. They are such great hosts though that we all felt pretty good to be there.”

The 177-44 score for the Chrome Mollys’s second victory of the season did not take away from the fun and excitement of the night.

“It was great to have the fans there, I was remembered by fans when I went to watch the Royal Rumble last week, and this past Saturday I did get quite a few cheers— especially when I got lead jam! That is so derby, to be loved even after you leave! The Belles of the Brawl have the first game behind us, we will learn as a team from this experience. There were some rookie mistakes that will go away quick. The Belles of the Brawl, we hit them, they fall!”

Belles Captain for the night Lass Compactor shares the nerves and excitement of being on the track for the first time.

In conclusion: this was our first game, we have 6 more bouts scheduled [check out Belle City plus the CWRDA tournament [June 17 to 19] and 2 Fresh 2 Furious [July 9]. Includes Royal City’s Violet Uprising on the 25th of June!

“We also host the Chrome Mollys from GTAR November 19th, our goals for the re-match are to increase our score, decrease our penalities, and of course show them
the same hospitality they showed us (and leave a few bruises … shhhh!)

Mark April 16 on your Derby calendar for next month. La Racaille are coming to Toronto.

END_OF_DOCUMENT_TOKEN_TO_BE_REPLACED

Recent Derby Entries and thanks to all!

the new Derby Season going into swing thought it would be a good idea that instead of my musings it would be better to feature the thoughts of the real stars of the game—the players. Turning now to Justine Sane. 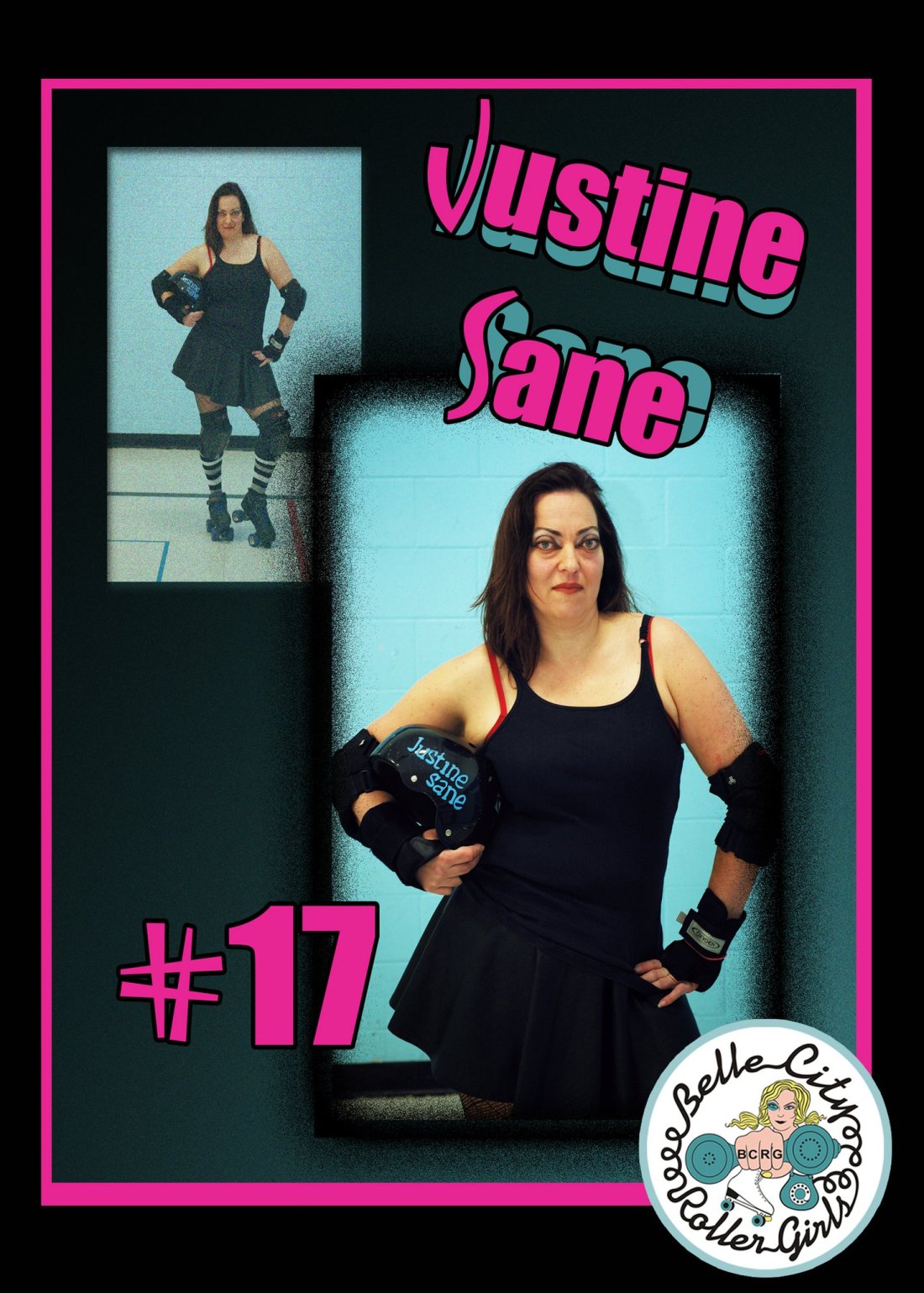 I have the theme song from Rocky in my head.
Is it in your head now too?

Brief preamble: Justine Sane was not someone you wished to be on the receiving end of a hit—”She hit me so hard it ratttled my teeth,” remembers GTA Rollergirl jammer Lee Way Wreck’Em ruefully and nobody ever manages to hit 5by5 full force—whether during a bout or in practice at GTAR. Justine Sane proudly wore the blue and white of Chrome Mollys at Fresh and Furious—wore the red and black of Derby Debutantes against Thames Fatales. Against the WEWRA Rollergettes she has played as a Molly and a Deb. She was part of the mixed Mollys/Debs squad that tilted against the Riot Squad in Ottawa.

Then came the move and through it all she stayed with Derby with a transition to the new league in Belle City.

hy do I play roller derby?

Because I can’t sing or dance! Actually that is what Rocky Balboa said when he was asked why he boxes. Maybe he just doesn’t know. That is kind of how I feel. I can’t really say why I started derby. I have no skating history, so I can’t really pinpoint what drew me to derby, maybe it was the whole personas, or the clothes, or the idea of hitting people, I don’t know. I just saw it, and knew I had to do it. The first time I knocked someone on their ass was the coolest feeling ever! Actually hitting someone and feeling that strong hit back—that equal match of strength where neither of us go down, we just absorb the raw power and feel it course through our veins—that’s a pretty close second.